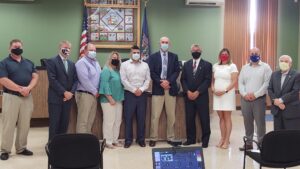 The Town of Eden along with Congressman Jacobs, Legislator Mills and Mitch Martin from Senator Gallivan’s office had the opportunity to honor Eden’s longtime Police Chief and Lieutenant, Michael Felschow and John McCarthy respectively.  Chief Felschow has been serving the town for 46 years and has been Chief for the past 11.  He was presented the “Key to the Town” at the Town Board Meeting last Wednesday, August 12, 2020.  Lieutenant McCarthy has been with the Eden Police Department for just over 40 years.  The last 14 years he has served as Lieutenant.  Both men were given proclamations by the Town, United States Congress, New York State Senate and Erie County Legislature.  We thank both men for their commitment and dedication to the Town of Eden and wish them well in their retirement.